Immersercise was completed at Northumbria, as my final project.

Tasked with a personal project, that could take the form of an app, animation or experiential experience, I had a few ideas around enhancing experiences that I had been a customer of.

From that came Immersercise, creating an exciting, motivation way to exercise.

Various routes of research were undertaken for this project to understand and develop each aspect to customer needs. Inspired by my own reaction to cardio, and backed up by 67% of customers surveyed, I wanted to create a more engaging experience whilst exercising, with the aim of bringing the outside, inside.

For the build, I aimed to create a completly immersed state, in order to obtain an enhaced engagement and motivation from the customer with their exercise. To achieve this I researched into peripheral vision and produced the optimal screen size at a sustained distance from the user, achieving 90° of vision.

In addition to this, gamification was explored in detail, with an interesting fact that Jane McGonigal explains in her ted talk, 'Gaming can make a better world'. She points out that the average US child between 5th grade and high school spends 10,000 hours gaming and 10,080 hours in school. This I found extrodinary, and linking this to Gabe Zichermann points in his talk, 'Can playing video games make you more productive?', where he discusses how games make people challenge themselves, engages audiences and how reward schemes can enhance enjoyment.

This researched laid the ground work for the build phase of the project. 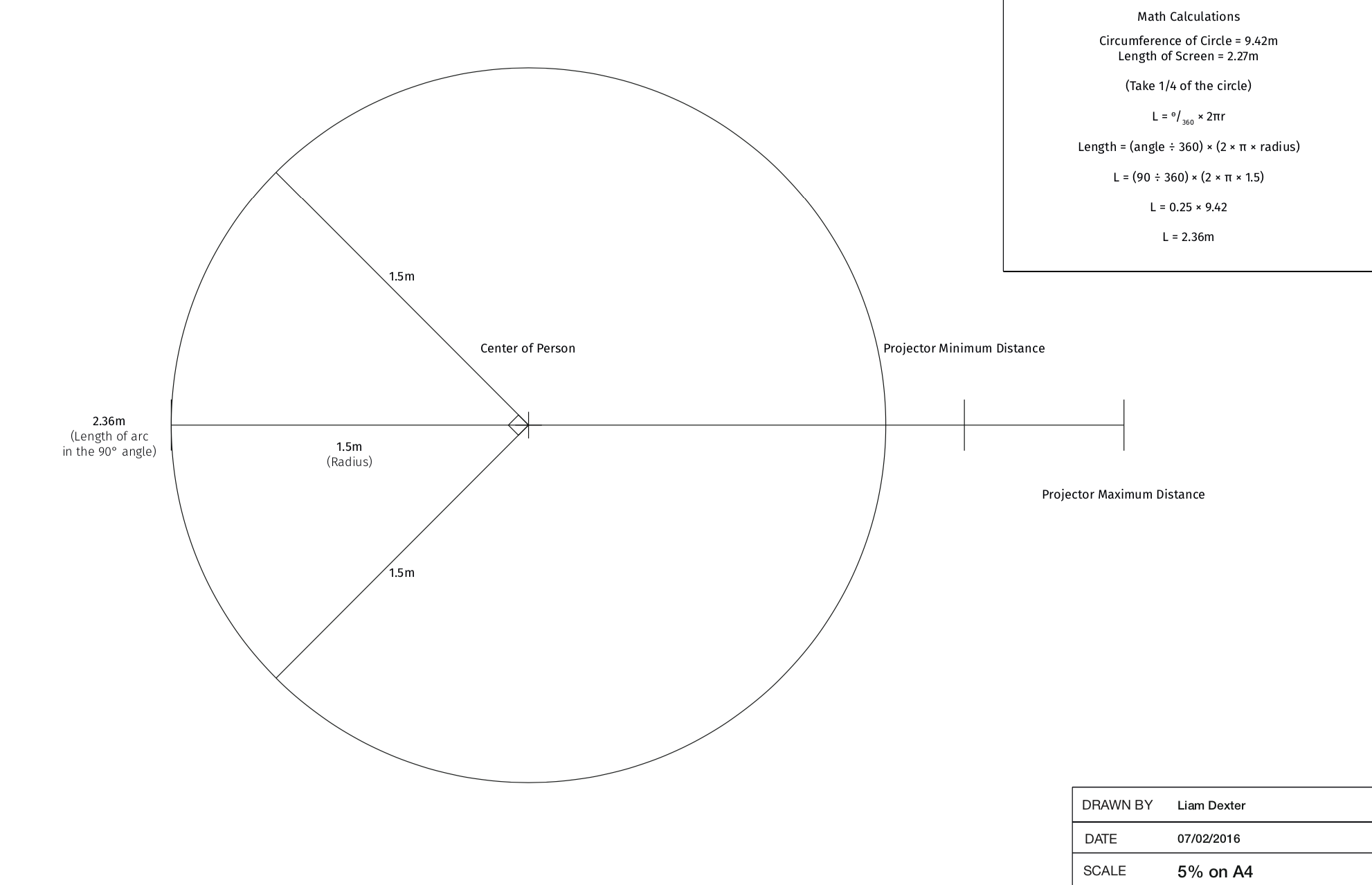 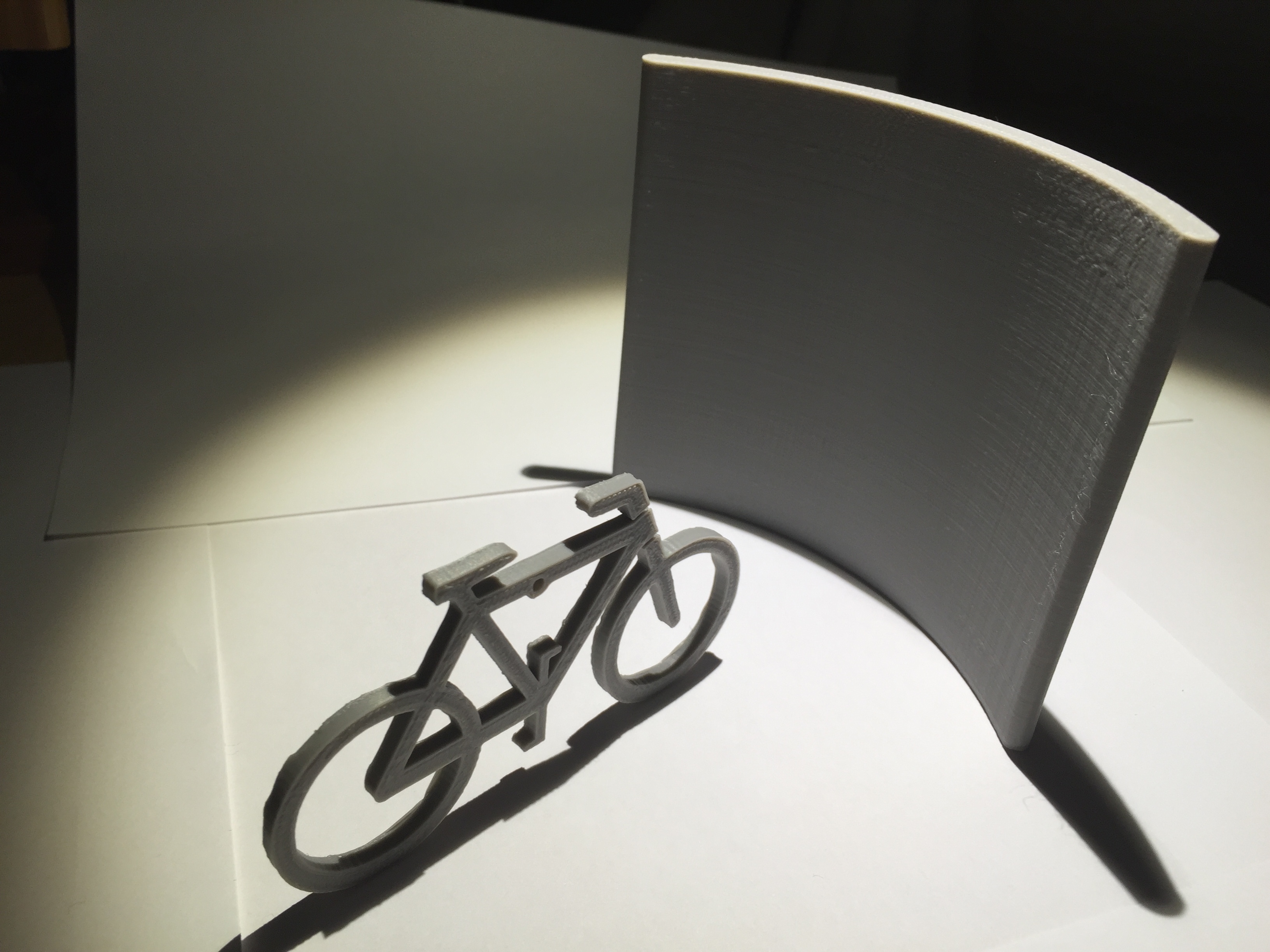 To obtain the desired outcome, I built my concept using 'Arduino' with a reed switch in order to calculate the speed at which the bike was traveling. This was then passed into an application 'Processing' to initate the play speed of the video, which was then output to 'Mad Mapper' which processed the display shape to fit the immersive screen.

Building of a 100inch curved screen to make the customer feel as if they were in the environment, was carefully measured out in line with research on peripheral vision, this meeting a 90° of vision, meeting mid-peripheral vision.

The outcome, allowed for a working prototype, where users could cycle to immersive video playback in real time. 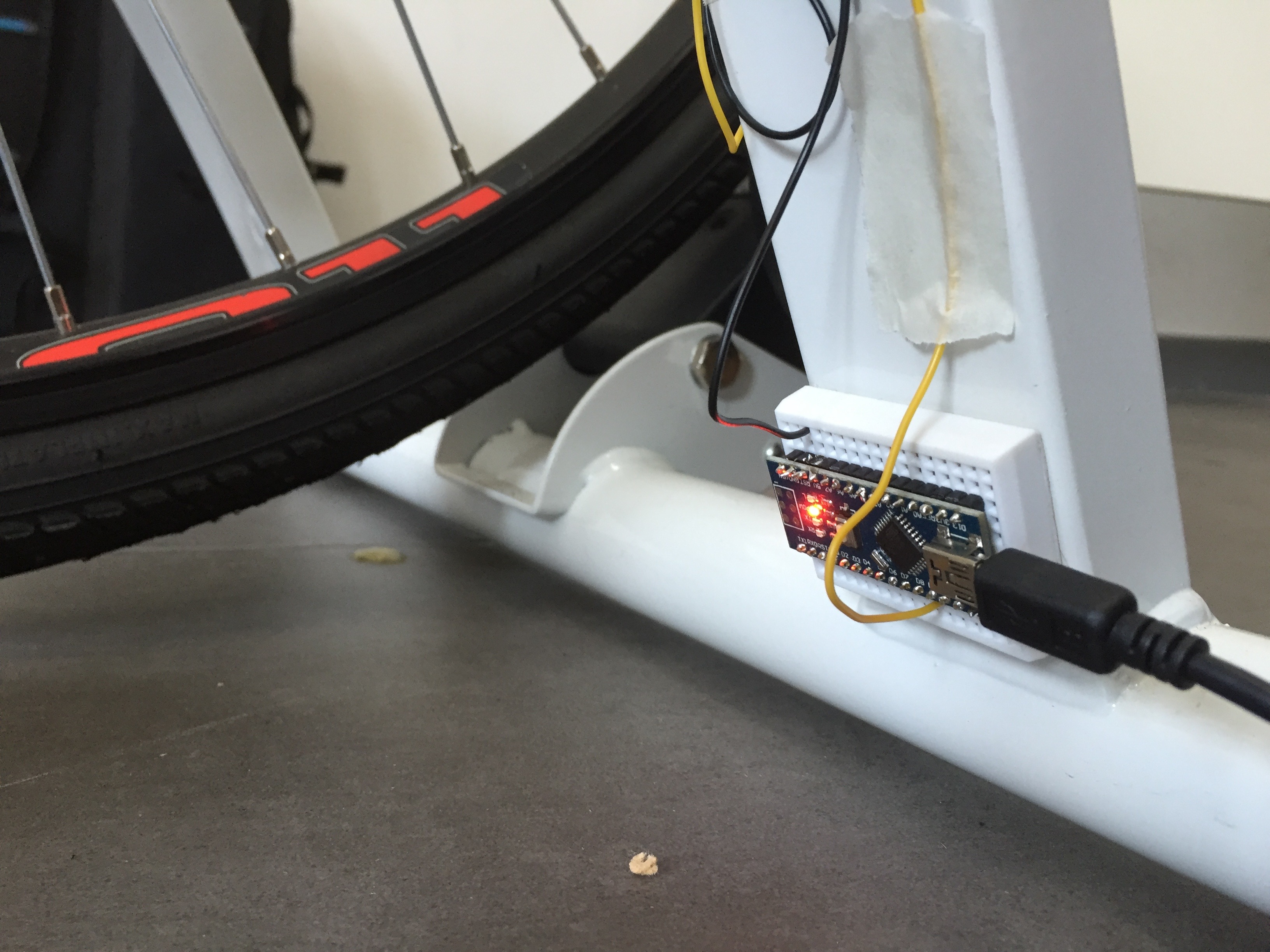 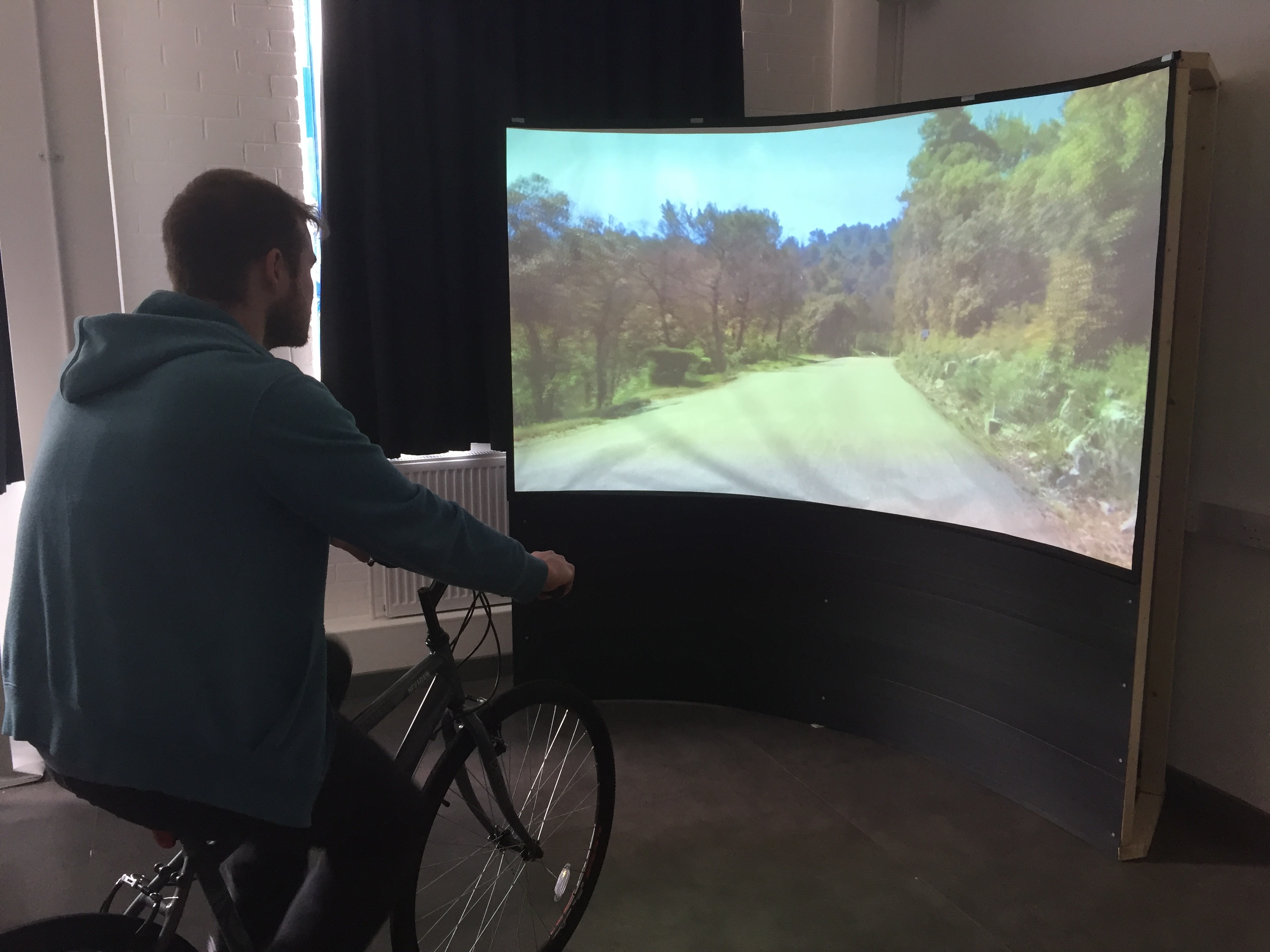 The next phase was to create an interface in which the system could be controlled. Thoughts of a series of buttons and smartphone application were initial ideas, but with the movement of Smart TV's it seemed an obvious choice to integrate television apps with this system. This allowing for a seamless interface at the home or gym.

Deciding on utalising Apple TV, the interface was built within Xcode with integration with 'Activity', 'Gamecenter' and 'AppleID' brings rewards, health tracking and single sign on to the platform. All of whish allowing for an effortless interaction through swipe gestures whilst exercising. 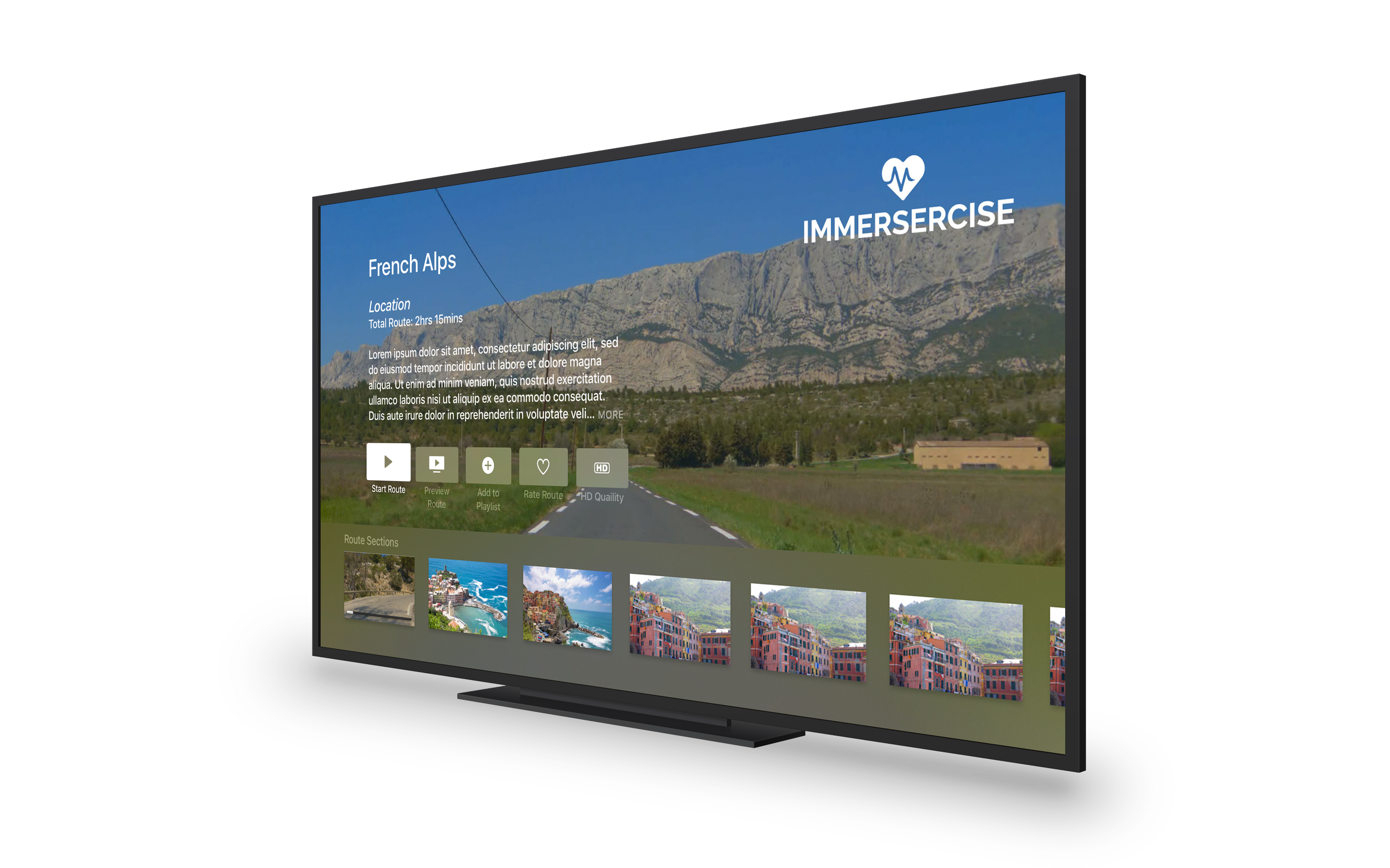 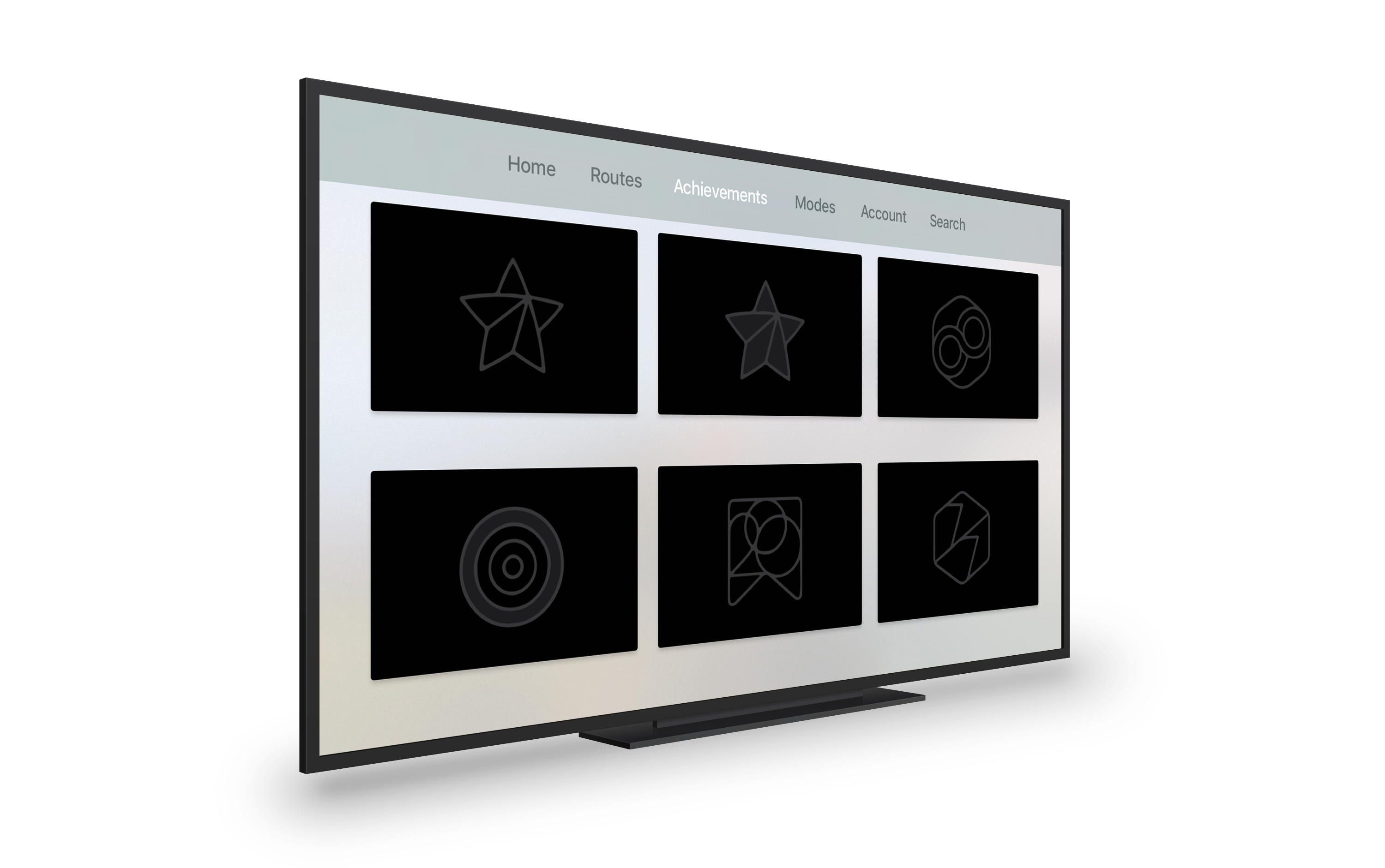